1795 — The first written description of the river now known as the Yellowstone was penned.

1797-1798 — David Thompson, explorer and geographer in the British fur trade of the Northwest, used the words “Yellow Stone” in notes he made while visiting Mandan villages on the upper Missouri. It is uncertain exactly how the words originated, although the canyon walls which tower over the river near its headwaters look like “Yellow Rock.” (1: p.4)

1805-06 — The Lewis and Clark expedition, as they made their way through what is now Montana, heard reports of a volcano to the south which sounded like thunder and made the earth tremble. For whatever reason, they did not investigate. (2: p.18)

1808 — John Colter, who had traveled with Lewis and Clark, visited the area, probably the first white man to get a glimpse of Yellowstone. (1: p.35)

1827 — The first written account of the Yellowstone region appeared in a Philadelphia newspaper, but it appears not to have been taken seriously because of the wild tales told therein. (2: p.20) Also, trapper Daniel T. Potts composed one of the earliest letters regarding present-day YellowstonePark, in which he described the thermal features in the area. (1: p.41-43)

1829— Trapper Joe Meek stumbled upon what is now known as the Norris Geyser basin area. His stories of “fire and brimstone” were met with unbelief. (1: p.43) 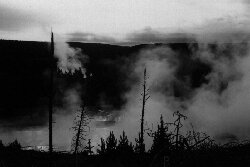 1830s — Mountain man Jim Bridger began exploring the Yellowstone region. Few believed the outlandish stories of waterfalls spouting upwards and petrified “birds and trees” which he repeated over and over. (2: p.23-24)

1834 — Warren Angus Ferris, clerk of the American Fur Company, visited what is now YellowstonePark and made a name for himself. He was the first actual “tourist” to visit the Yellowstone region (that is, he did so purely out of curiosity), he was the first to provide an adequate description of a geyser, and the first to apply the word “geyser” to Yellowstone’s thermal features. (1: p.46-47)

1835-39 — Trapper Osbourne Russell, during the height of the “Trapper Era,” ventured into the Yellowstone region three times, traveling the shores of YellowstoneLake and many of the thermal areas and smaller lakes to the south of YellowstoneLake. (1: p.49-52)

1842 — Another account of the Yellowstone region was published anonymously by ex-trapper Warren Ferris in the Western Literary Messenger. Ferris was the first to identify the park’s thermal features as “geysers,” a term which had originated in Iceland.

1850’s-60’s — The struggle over slavery, the American Civil War which it led to, the immediate aftermath of that war, and skirmishes with Indians kept the United States government from sending an official exploration party to the Yellowstone region. (2: p.34)

1863 — A group of prospectors, headed by “Colonel” Walter Washington deLacy, pushed into the southern portion of YellowstonePark, where they encountered some thermal features. A few years afterward, deLacyLake appeared on a map of the area, until the name was changed to the present-day ShoshoneLake. (1: p.64-65)

1865 — Father Francis Xavier Kuppens, a young Jesuit priest serving near Great Falls, Montana, was guided into present-day YellowstonePark by a group of Piegan Indians. Among other things, he visited the Grand Canyon of the Yellowstone and the geysers of the FireholeBasin. Later that year, Kuppens had opportunity to describe his incredible journey to Acting Territorial Governor Thomas Francis Meagher, who at that time is credited with suggesting that is such a place of wonders did exist, it should be preserved as a national park. (1: P.89-90)

1868 — Frederick and Phillip Bottler became the first settlers between Bozeman and the present Park. The Bottler Ranch was at first a jumping point for hunting and prospecting. (1: p.81)

1869 — Three mine workers named David E. Folsom, Charles W. Cook and William Peterson set out to explore the Yellowstone region. They visited the Grand Canyon of the Yellowstone, saw the teeming wildlife in the area, and experienced the geysers and boiling pools. According to their recollection, they realized the area needed to be preserved from commercialization. After returning from their outing, Cook and Folsom wrote articles about their trip, but reputable magazine’s refused to publish what they considered as unreliable stories. (1: p.91-101) 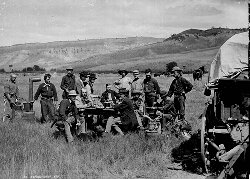 1870 — (Photo:   The Hayden Survey team, Red Butte, Wyoming.  Hayden is seated at the far end of the table and Jackson is standing at the far right.  Click on the photo to hear William Jackson talking about the rumors of the Yellowstone region.) Following years of wild rumors about the Yellowstone region and on the heels of the Folsom-Cook-Peterson party, a group of gold prospectors, curious private citizens and government surveyors penetrated the Yellowstone region and beheld the truly glorious wonders of the area. Those who gazed upon the area realized the priceless nature of the region and began striving to make certain the region was preserved from development so that all Americans could have the opportunity to gaze upon and enjoy its wonders.

The party of gold prospectors included A. Bart Henderson, James Gourley, Adam Miller, Ed Hibbard and a man simply known as “Dad.” They attempted to prospect for gold in the Lamar Valley area. Over the summer months they spent in the area, they had near-death encounters with buffalo, grizzlies and Indians. Although they named several natural features in the area, they were unsuccessful in regards to finding gold, and the short era of the prospector in Yellowstone Park came to an end. (1: p.81-82)

The most famous of the 1870 parties which explored the Yellowstone region was the group led by Henry D. Washburn, surveyor-general of the Montana territory. This famous Washburn party, which is credited with “discovering” Yellowstone, consisted of National Pitt Langford (the scribe of the group and later selected as the first Park Superintendent), Cornelius Hedges and Walter Trumbull (journalists who helped the nation to understand that the reality of the wonders of Yellowstone following the expedition), Truman C. Everts (the oldest of the group, he became separated from the party and hopelessly lost in the Yellowstone wilderness for thirty-seven days as winter approached; he survived the ordeal and his incredible story helped to further arose the nation’s interest in Yellowstone) and First Lieutenant Gustavus Doane (a veteran of the US Calvary, he headed the military escort which accompanied the group and made an official report of the journey to US government). During the expedition, Washburn named “Old Faithful.” (3) 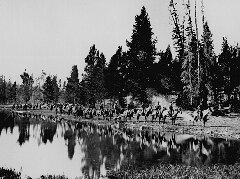 1871 — Upon hearing Langford’s account of the previous year’s expedition into the Yellowstone region, Ferdinand V. Hayden, a Civil War veteran and head of the US government’s new geological survey, was appointed by Congress to make an official exploration into the region. Hayden assembled a variety of geologists, botanists and zoologists as well as artist Thomas Moran and photographer William H. Jackson. The party was stunned by the wonders and beauty they saw. Moran’s watercolors and Jackson’s photographs were proof of the wonders. Hayden made a 500-page report to Congress, and the lobbying to make Yellowstone a national “park” began. (1: p.141-155)