This is part one of two parts of the story of Yellowstone‘s Early Years.

1872 — On March 1, President Ulysses Grant signed into existence the world’s first national park, Yellowstone National Park. The 2.2 million acres of wilderness was “set apart as a public park or pleasuring ground for the benefit and enjoyment of the people.” Nathaniel Langford, one of the most outspoken proponents of the national park idea, was appointed the first superintendent of the Park. He was immediately assigned the task of making a “thorough exploration” of the Park, and decided to make his investigation as a guest of the Hayden Survey party, which was returning to Yellowstone for further research. Langford thus spent a memorable summer in the newly commissioned YellowstonePark. (1: p.172-192)

1873 – 1882— The nation and government leaders sought to grapple with the “national park” issue and that which it entailed. The Yellowstone region was visited by the few fortunate who could afford to make the trip and were hearty enough to brave the elements of the great outdoors. Opportunists sought to take advantage of the attraction of YellowstonePark. (2: p. 58-59) Read about the involvement of Jay Cooke and the Northern Pacific Railway.

1883 — President Chester Arthur took a camping tour of Yellowstone, brought YellowstonePark to a new level of awareness among the nation’s citizens. The nation became concerned that opportunists were exploiting the Park. (1: p.277-282) The National Hotel at Mammoth Hot Springs was built. The massive structure was 414 fee long. It lost money from the beginning, and only existed for a short period of time. (1: p.272-273)

1886 — The Secretary of the Interior comes to realize the hopelessness of trying to keep opportunists from ruining the Park in the face of recent Park superintendents who appeared unconcerned about vandalism and poaching. The Interior department asks the US Army to intervene, and Yellowstone came under military jurisdiction, which gradually brought order back into the Park. (2: p.59) Also, Lt. Daniel C. Kingman conceived of the so-called “Grand Loop” which became the main roadway through the Park.

1890 — The Lake Hotel near YellowstoneLake and the Fountain Hotel near Old Faithful are built. The former was not destined to last. (2: p.60) 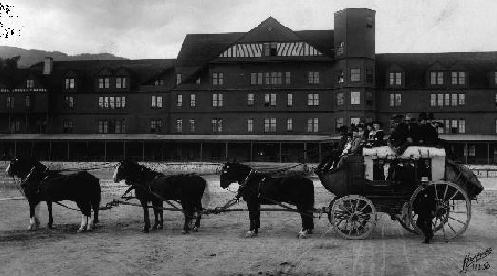 1894 — The Lacey Act is passed by Congress, giving full protection to wildlife in YellowstonePark (except wolves and coyotes) and paving the way for future wildlife and environmental movements. (2: p.60)

A “Winter Expedition of 1894” sets out to count and photograph the number of bison:

“The party consisted of Captain Scott, Lieut. Forsyth, Scott Burgess, Robert Burns, Photographer Haynes, and three non-commissioned officers.  On Norwegian skis, with packs of sleeping bags, provisions and camera, they proceeded directly to the Hayden Valley via Norris and the Grand Canyon.  They found eighty-one buffaloes in the valley, seventy-three in one herd; and numerous groups of elk …

The second day they discover the “cache” of a poacher, very much to their surprise.  It consists of a canvas tepee, sleeping bag, provisions and toboggan and six buffalo heads suspended in a tree.  A trace of fire in the tepee led them to believe that the poacher was in the vicinity, and to capture him was the next move.  Some five miles from camp they heard five or six rifle shots in rapid succession.  Hastening through the timber to an opening they came directly upon the poacher.  He had driven six of the buffaloes into the deep snow and slaughtered them all.  Fortunately, it was snowing hard, and the approach of the scout was not noticed by the poacher or his dog until the arrest was made.  He was taken to the Lake Hotel and from there to the guard house at Fort Yellowstone.  In addition to the twelve buffaloes that were killed by this poacher a small herd of seven was seen in the Pelican Creek country, making less than 100 in the Park.  Elk were seen in great numbers in the foothills of Mount Washburn, on Specimen Ridge, along the east fork of the Yellowstone, on Slough Creek and the Yellowstone River to Mt. Everts.  Small bands of mountain sheep, deer and antelopes were seen on Mt. Everts.  The open water of the Yellowstone between the lake and falls was alive with ducks and swans.  Red foxes and coyotes were numerous and an occasional black fox and footprints of mountain lions and bears were seen.  The party in about thirty days traveled over 300 miles.” (As recounted in Hayne’s Guide)

1903— President Theodore Roosevelt visits Yellowstone and is awed at the beauty and wildness of the Park. By now, the railroads are catering to Yellowstone tourists, taking visitors by the carloads to the Park. (2: p.60) 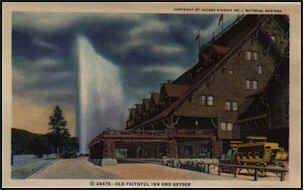 1903-1904 — The most famous structure  in Yellowstone, the Old Faithful Inn, is built. The unique building is constructed of native logs and built during the winter season.

1908 — Between Old Faithful and Spring Creek Canyon, one bandit successfully holds up sixteen vehicles and robs the occupants.

1912 — National Geographic magazine did a feature story on America’s National Parks. It recommended that the visitor take 5 1/2 days to see the Park.

Continue to the next chapter in Yellowstone‘s history:
The Age of the Automobile, 1916-1971: Yellowstone, America’s Pleasuring Ground