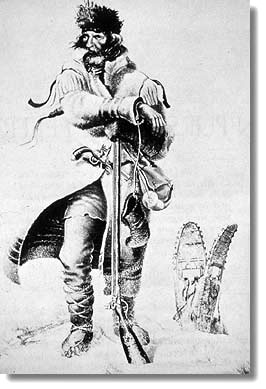 John Colter (c.1774 – May 7, 1812 or November 22, 1813) was a member of the Lewis and Clark Expedition (1804−1806). Though party to one of the more famous expeditions in history, Colter is best remembered for explorations he made during the winter of 1807–1808, when Colter became the first known person of European descent to enter the region now known as Yellowstone National Park, and to see the Teton Mountain Range. Colter spent months alone in the wilderness, and is widely considered to be the first mountain man
Near the end of the Lewis and Clark Expedition in 1806, John Colter went to work for the Missouri Fur Trading Company. During the following year he was sent on a 500-mile journey through untracked country with hopes of setting up trade with several tribes. On this dangerous and solitary adventure, Colter trekked through Yellowstone. He is believed to be the first Euro-American to see Yellowstone Lake and witness some of the hot springs that would someday become Yellowstone National Park.