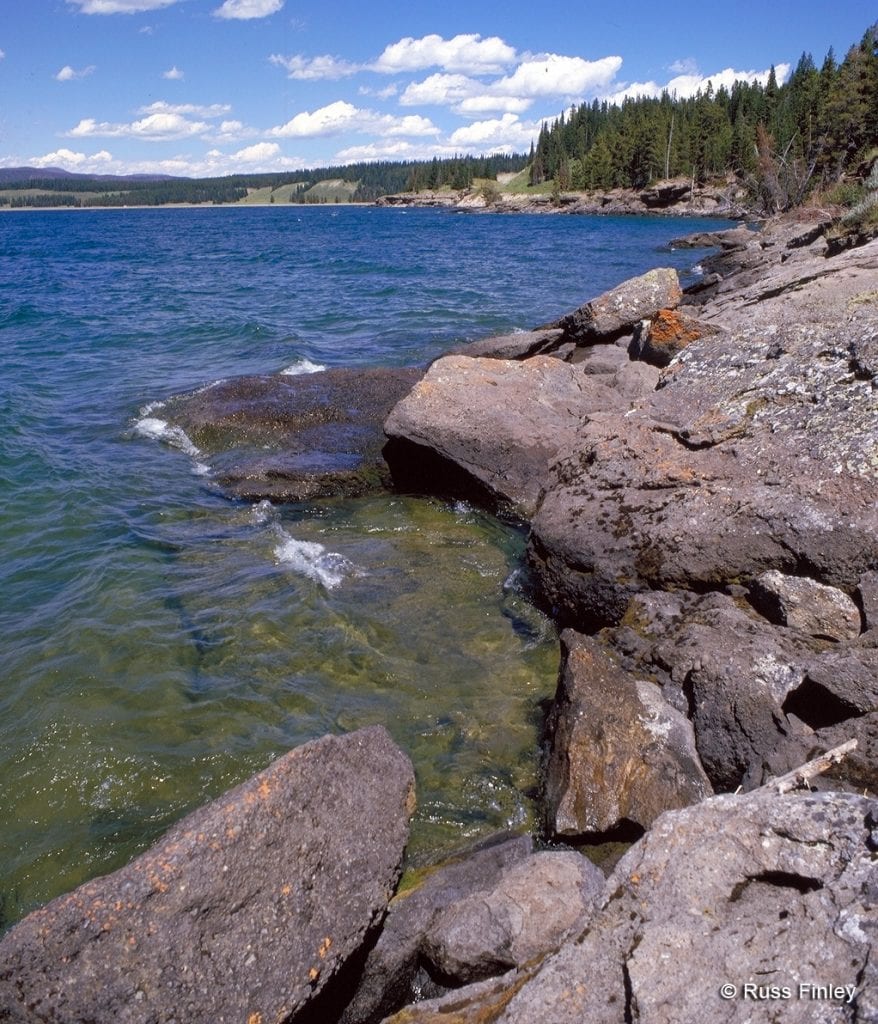 Geologists indicate that large volcanic eruptions have occurred in Yellowstone on an approximate interval of 600,000 years. The most recent of these (600,000 years ago) erupted from two large vents, one near Old Faithful, the Mallard Lake Dome, and one just north of Fishing Bridge, the Sour Creek Dome. Ash from this huge explosion, 1,000 times the size of Mt. St. Helens, has been found all across the continent. The magma chamber then collapsed, forming a large caldera filled partially by subsequent lava flows. Part of this caldera is the 136-square mile basin of Yellowstone Lake. The original lake was 200 ft. higher than the present-day lake, extending northward across Hayden Valley to the base of Mt. Washburn.

It is thought that Yellowstone Lake originally drained south into the Pacific Ocean via the Snake River. The lake currently drains north from its only outlet, the Yellowstone River, at Fishing Bridge. The elevation of the lake’s north end does not drop substantially until LeHardy Rapids. Therefore, this spot is considered the actual northern boundary of Yellowstone Lake.

In the last decade, geological research has determined that the two volcanic vents, now known as “resurgent domes”, are rising again. From year to year, they either rise or fall, with an average net uplift of about one inch per year. During the period between 1923 and 1985, the Sour Creek Dome was rising. In the years since 1986, it has either declined or remained the same. The resurgence of the Sour Creek dome, just north of Fishing Bridge is causing Yellowstone Lake to “tilt” southward. Larger sandy beaches can now be found on the north shore of the lake, and flooded areas can be found in the southern arms.

The Hayden Valley was once filled by an arm of Yellowstone Lake. Therefore, it contains fine-grained lake sediments that are now covered with glacial till left from the most recent glacial retreat 13,000 years ago. Because the glacial till contains many different grain sizes, including clay and a thin layer of lake sediments, water cannot percolate readily into the ground. This is why the Hayden Valley is marshy and has little encroachment of trees.

The thermal features at Mud Volcano and Sulphur Caldron are primarily mud pots and fumaroles because the area is situated on a perched water system with little water available. Fumaroles or “steam vents” occur when the ground water boils away faster than it can be recharged. Also, the vapors are rich in sulfuric acid that leaches the rock, breaking it down into clay. Because no water washes away the acid or leached rock, it remains as sticky clay to form a mud pot. Hydrogen sulfide gas is present deep in the earth at Mud Volcano. As this gas combines with water and the sulfur is metabolized by cyanobacteria, a solution of sulfuric acid is formed that dissolves the surface soils to create pools and cones of clay and mud. Along with hydrogen sulfide, steam, carbon dioxide, and other gases explode through the layers of mud.

A series of shallow earthquakes associated with the volcanic activity in Yellowstone struck this area in 1978. Soil temperatures increased to nearly 200° F (93° C). The slope between Sizzling Basin and Mud Geyser, once covered with green grass and trees, became a barren landscape of fallen trees known as “the cooking hillside.”