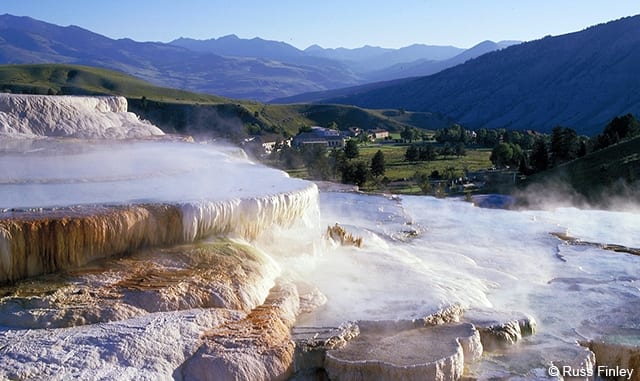 Mammoth Hot Springs are a surficial expression of the deep volcanic forces at work in Yellowstone. Although these springs lie outside the caldera boundary, scientists surmise that the heat from the hot springs comes from the same magmatic system that fuels other Yellowstone thermal areas. A large fault system runs between Norris Geyser Basin and Mammoth, which may allow thermal water to flow between the two. Also, multiple basalt eruptions have occurred in this area. Thus, basalt may be a heat source for the Mammoth area.

Thermal activity here is extensive both over time and distance. Terrace Mountain, northwest of Golden Gate, has a thick cap of travertine. The Mammoth Terraces extend all the way from the hillside where we see them today, across the Parade Ground, and down to Boiling River. The Mammoth Hotel, as well as all of Fort Yellowstone, is built upon an old terrace formation known as Hotel Terrace. There was some concern when construction began in 1891 on the Fort site that the hollow ground would not support the weight of the buildings. Several large sink holes (fenced off) can be seen out on the Parade Ground. This area has been thermally active for several thousand years.

The Mammoth area exhibits much evidence of glacial activity from the Pinedale Glaciation. The summit of Terrace Mountain is covered with glacial till, thereby dating the travertine formation there to earlier than the end of the Pinedale Glaciation. Several thermal kames, including Capitol Hill and Dude Hill, are major features of the Mammoth Village area. Ice-marginal stream beds are in evidence in the small, narrow valleys where Floating Island Lake and Phantom Lake are found. In Gardner Canyon, one can see the old, sorted gravel bed of the Gardner River covered by unsorted glacial till.