Anemone Geyser
Anemone is one of the easiest geysers to see in the Upper Geyser Basin. There is usually an eruption here every 10 minutes or so. Albeit, these eruptions are small but they can teach you a lot about the workings of a geyser. Anemone is a good place to start when exploring the geyser basin.Anemone consists of two vents that often play independently. The front, or north vent is often called Big Anemone and the back or south vent is often called Little Anemone. Big Anemone usually erupts every 7 to 10 minutes for about 45 seconds to a height of about 10 feet. Little Anemone usually erupts every 20 to 35 minutes for up to 10 minutes to a height of about 5 feet.At Anemone, it is easy to view the normal cycle of a geyser’s eruption. First, the water starts to rise in the vent. On some geysers this rise is slow on others it is fast. Next, the water begins to overflow. Some geysers do not require this step, others require a long period of overflow. Then, the geyser erupts. The eruption can end in two ways. At Anemone, the geyser runs out of steam before it runs out of water. When the energy is depleted, the steam that is driving the eruption collapses back into liquid water. This sucks the water at the surface vent back down into the plumbing system of the geyser to be reheated for the next eruption. At anemone, the suction caused by the collapsing steam is fairly strong causing a sucking sound when the water is pulled down the vent. In other geysers where the water runs out before the steam, the geyser will have a steam phase where it is mainly steam emitted from the vent with very little water. Castle is a good example of a geyser with a steam phase. 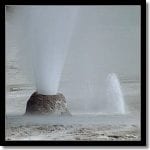 Beehive Geyser is located in the Upper Basin, just behind Old Faithful. Its eruptions are unpredictable but is one of the best in Yellowstone. The small geyser you see to the right of the main cone is Beehives’ indicator. It begins erupting around 20 minutes prior to a full eruption of Beehive. 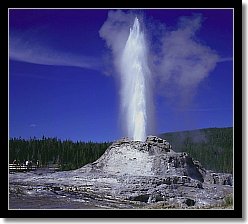 Castle Geyser is a very old geyser. Estimates put the age of its 12 foot high cone at 5,000 to 15,000 years. It would take that long to build such a large cone. Even more remarkable is that Castle’s cone sits on top of an even more massive sinter formation deposited by an even earlier spring. Castle is a cone-type geyser. Its interval is usually between 9 and 11 hours. Its maximum height is 60 to 90 feet. The 20 minute water phase of a major eruption is followed by a 40 minute steam phase. During the steam phase, the eruption mainly consists of forced steam with very little water (see the picture). The first 10 to 15 minutes of the steam phase is relatively forceful and fairly loud and interesting to hear. As with most steam phases, the change from water to steam is gradual and an exact time for the change can rarely be noted. Castle occasionally has minor eruptions which last only a few minutes. These minors start similarly to the major eruptions but abruptly stop after a few minutes. When this happens, Castle becomes unpredictable until it has its next major eruption.

Clepsydra Geyser, located in the Lower Geyser Basin, is named after a Greek water clock. During the 1800’s it’s intervals were almost exactly 3 minutes. After he 1959 earthquake it entered what is known as a wild phase, erupting almost continuously. 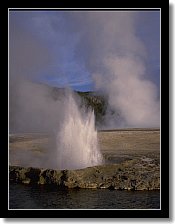 Cliff Geyser is located in the Black Sand Basin which is part of the Upper Geyser Basin. Eruptions are common but unpredictable. It’s cliff like cone sits on the edge of Iron Spring Creek.

Daisy Geyser
Daisy is usually the most predictable of the predicted geysers. This coupled with its relative frequency, makes Daisy one of the easiest geysers to see. The exception to this rule is when nearby Splendid Geyser is active. Fortunately, for those that like Daisy, Splendid is rarely active. Unfortunately, Splendid is arguably the more spectacular geyser.
Daisy is a cone-type geyser. Its interval is usually 90 to 110 minutes, its height 60 to75 feet and its duration 3 to 4 minutes. When Daisy Geyser is regular (in other words, when Splendid is not active) you can usually predict the eruptions very accurately using the current average interval. In fact, this is so accurate that the Rangers often predict two eruption of Daisy in advance just using the interval.

But, what happens if you don’t know when Daisy last erupted or what its current interval is? Well, there are a couple of things you can look for.

Echinus Geyser is located in Norris Geyser Basin. Echinus is the largest acid-water geyser known. it was once a very predictable geyser but now eruptions are rare. It’s large pool slowly fills with water prior to an eruption. When the eruption begins each burst is different from the others. Some reaching heights of 125 feet.

Fountain Geyser is a classic fountain type geyser, erupting from a pool of water and characterized by it’s splashing action. This geyser is not easily predictable but has an average interval of around 11 hours. 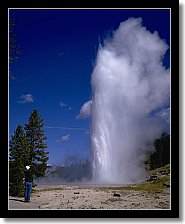 Grand Geyser is consistently the tallest and most spectacular of the predicted geysers. This excitement doesn’t come without a cost though. It has the largest prediction window of the predicted geysers. Even so, it is worth waiting to see. Grand erupts from a pool of water making it a fountain-type geyser as opposed to Old Faithful which is a cone-type geyser. Grand’s interval is usually around 8-12 hours, its height about 150-180 feet and its duration is about 10-12 minutes. It will often stop after about 9 minutes and then restart after a minute or so. This second “burst” and any subsequent bursts are often among the tallest if not the tallest of the eruption. Be sure to wait and see if there is a second burst. It is easy to get confused when looking for Grand Geyser. Of course, the Park Service has put out a sign to help you but the first thing most people notice is the large raised rim around nearby Turban Geyser and they miss the large flat pool just to the right of Turban. This large pool, with almost no rim, is Grand Geyser. Grand is closely related to Turban Geyser. During the hours prior to an eruption of Grand, Turban erupts approximately every 20 minutes. When Grand Geyser erupts, it does so just before or after the start of an eruption of Turban Geyser. If Grand doesn’t start at this time, you’ll have to wait another 20 minutes for the next eruption of Turban and hope Once Grand erupts, there is the possibility of more than one burst. A Grand burst is defined as the continuous eruption of water. The shorter the first burst, preferably less then 10 minutes, the more likely it is that you will see a second, third or even more bursts. (The most bursts seen in one eruption during the last few years is 11 but the average is usually 2 to 4.) After a burst has ended, watch Grand’s pool. Sometimes the water will be out of sight, sometimes it will still be visible. Watch to see if the water rises. If the water rises and begins to bubble be prepared for a spectacular sight as Grand erupts to its full height in one continuous motion. If the water drops, well, there’s always the next eruption.

Jet Geyser is closely related to Fountain Geyser and is most frequent when Fountain is erupting. Jet erupts from at least 6 different vents, with the central one reaching heights of 20 feet.

Lion Geyser is the main feature of the Lion Geyser Complex. Its eruptions issue from the largest cone of the group. Eruptions reach heights of 50 feet, but in 1988 an eruption reached 98 feet.

Plume Geyser was created in 1922 when a steam explosion created it’s surface vent. In 1972 another steam explosion enlarged it’s vent. Plume has undergone a number of activity changes but currently erupts every 30 minutes. 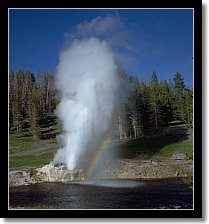 Riverside Geyser has one of the most picturesque settings of any geyser.

Riverside is a cone-type geyser. Its interval is usually 5 1/2 to 7 hours, its height about 75 feet and its duration about 1/2 hour. The water phase of the
eruption lasts about 20 minutes and is followed by a steam phase.

You watch Riverside from a viewing area across the Firehole river from the geyser. From this position, Riverside’s formation looks something like a chair.
There is a vent high up on the back and another vent in the seat of the chair. Except for some minor splashing, the geyser erupts from the lower vent in the
seat of the chair. About 1 1/2 to 2 hours before the eruption the main vent in the seat of the chair begins to overflow into the river. This overflow is
variable. About an hour later, the small vents behind the main vent will begin to bubble and boil. The activity fluctuates but seems to build as time
progresses. Finally a splash or two will be seen in the upper vent at the top of the chair back. One of these splashes will be large enough to spill water into
the river, this usually starts the eruption. 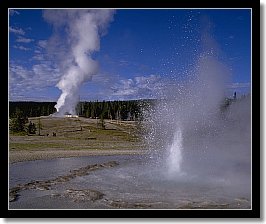 Sawmill Geyser is a classic fountain type geyser, erupting from a pool of water. Eruptions are in a series of bursts reaching heights of 35 feet.