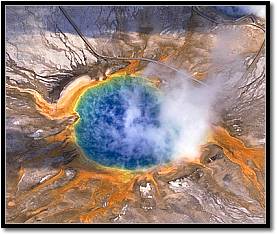 Midway Geyser Basin:
Midway is home to two of the largest thermal features in Yellowstone. Grand Prismatic Spring, at over 300 feet across is the largest hot spring in Yellowstone. The various colors of the cyano-bacteria around the pool are quite pretty. Excelsior Geyser was the largest geyser in the world in the 1880s. Now it is just a very large crater that emits a copious amount of water. After nearly 100 years of inactivity, it had some minor eruptions in 1984. there are a few other pools and geysers at Midway.
Mud Volcano Area
The activity at the Mud Volcano area is interesting and worth exploring. The temperatures here are lower than at the geyser basins. In most cases, what looks like boiling is actually just the evolution of gasses, especially carbon dioxide..
West Thumb Geyser Basin:
West Thumb is a small collection of geysers and hot springs located on the shore of Lake Yellowstone. This backdrop can be very pretty. Two of Yellowstone’s prettiest pools, Black Pool and Abyss Pool are found here.
Black Sand Basin:
Black Sand Basin is actually part of the Upper Geyser basin. There are a couple of frequent small geysers and a couple of large very infrequent geysers here but the stars of the area are the very colorful hot springs.
Biscuit Basin:
Biscuit Basin is also part of the Upper Geyser Basin. There are a number of small geysers here. The most spectacular is probably Jewel Geyser which erupts about every 10 minutes to 10-25 feet. Biscuit basin was named for biscuit shaped sinter formations formerly found around Sapphire Pool. For a few years following the 1959 Hebgen Lake earthquake, Sapphire became a major geyser. In the process, it greatly enlarged its crater and washed all the biscuit formations away. Sapphire is now a quiet green colored pool.
Lone Star Geyser Basin:
This area is reached by an easy and enjoyable three mile trail that follows the Firehole River. This is one of the few trails in Yellowstone open to bicycles. The small basin is dominated by Lone Star Geyser. Lone Star erupts at three hour intervals and is very predictable. About 1/2 hour prior to the major eruption it has a minor eruption which lasts about 5 minutes. The major eruption lasts about 30 minutes and is concluded with a loud steam phase. The eruption reaches about 45 feet. Rarely, the major eruption is preceded by two minor eruptions. Lone Star is a nice destination for a day hike and picnic, assuming you take bug repellent.
Shoshone Geyser Basin:
Shoshone Geyser Basin is in the backcountry, only accessible by a 9 mile trail. It contains at least 40 geysers. Many of which are quite active. The main performer is Minute Man Geyser which can erupt to 40 feet.
Heart Lake Geyser Basin:
Heart Lake Geyser Basin is in the backcountry, only accessible by trail. the first geysers are encountered about five miles in. There are close to 40 geysers in the basin which stretches for about 2 1/2 miles along Witch Creek. Two of the major geysers are 50′ Rustic and 60′ Glade.