Norris Geyser Basin is the the hottest geyser basin in Yellowstone. The basin is comprised of two distinct sections: The Back Basin is in a forest setting (at least it was before the 1988 fires, now its more of a regenerating forest setting). It contains geysers and hot springs tucked among the trees. The Porcelain

Basin is characterized by a lack of vegetation. No plants can live in thr hot, acidic, water emitted from the numerous thermal features in the basin. Porcelain Basin presents a beautiful but desolate visage which is unlike any of the other geyser basins in Yellowstone.

Norris Geyser Basin is constantly changing. New geysers are born, old ones die. Even the major geysers change from year to year. This makes Norris an interesting place to 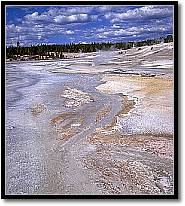 study but a difficult place to predict. This is part of the fun of Norris.

The “stars” of Norris are the strange look of Porcelain Basin and the fun eruptions of Echinus Geyser. Both are well worth seeing.

Norris Geyser Basin is home to the largest active geyser in the world, Steamboat Geyser. Steamboat can reach 380 feet and its steam phase can be heard miles away. Unfortunately, Steamboat is rare, the last major eruption was in 1991. Even so, Steamboat can be fun to watch. It often has minor eruptions some of which reach 40 feet. And, who knows, someone will probably be present when it has its next big eruption, why not you.

A Few other features of interest include:

Echinus Geyser:
See below for more information on this, the only predicted geyser at Norris.
Whirligig Geyser:
This is a fun, if small geyser. The fun part is the chugging sounds the back vent makes during the eruptions.
Cistern Spring:
Cistern is connected to Steamboat Geyser. After an eruption of Steamboat, Cistern drains. Cistern has formed some pretty terraces which can be seen on the north side of the pool.
Constant Geyser:
In the past few years has been a relatively frequent performer, sometimes erupting every half hour or so in a quick, few seconds, burst. Constant is located just behind and to the right of Whirligig Geyser.
Porcelain Basin:
There are numerous small geysers in Porcelain Basin. The activity here is vigorous but often short lived. Geysers can come and go in days and even the larger more stable geysers change from year to year and some times from day to day.
Veteran Geyser:
Veteran is often a very active geyser with water being erupted almost continuously. At times though, it does go through cycles that ultimately build to a major eruptions that can throw water about 40 feet at an angle. After these major eruptions, it then rests for a while before starting to build again.
Porkchop Geyser:
Porkchop exploded in 1989. For a period before that, Porkchop erupted continuously to 30 feet. Then on September 5, 1989, the steam pressure became too great and it exploded in a steam explosion. The blast blew rocks up to 220 feet away. You can still see the rocks it upended around its crater. Porkchop is now a gently boiling pool.
Emerald Spring:
Emerald Spring is a 27 foot deep, green colored, pool of water which usuaaly stays a few degrees below boiling. The bubbles you see are caused by carbon dioxide, steam and other gasses. The water is about as acidic as tomato juice. The green color is due to the combination of the blue of the deep water and the yellow of sulfur that lines the pool’s walls. Emerald has been known to act as a geyser in the past sometimes reaching as much as 80 feet tall but this hasn’t been seen since the early 1930s. 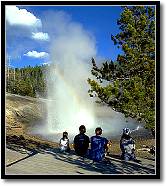 Echinus Geyser was a crowd pleaser for a number of years and then in 1997 it started to visibly slow down. As of February 1999, it was being described as fairly weak and erratic. Echinus has long been the only predicted geyser at Norris, it is unclear if it will keep this status. Predictions have been posted at the Norris Museum, check there for up to date information.

In February 1999, eruptions started from an overflowing pool and lasted only about four minutes. Intervals between eruptions were around 90 minutes and the maximum height seen was about 30 to 40 feet.

Prior to the slow down in 1997, Echinus’ maximum height was about 125 feet though most bursts were shorter than this. Each eruption usually some some bursts to at least 75 feet, though. Eruptions lasted from a minute to over an hour, though, most lasted between 5 and 15 minutes. It erupted every 20 to 80 minutes, making it the most frequent of the geysers predicted in Yellowstone. Given Echinus Geyser’s great show and its relatively short interval, it was worth waiting for even if you didn’t know the next prediction time.

Echinus still is the largest frequently active acid geyser in the world. Unlike most geysers in Yellowstone and around the world which tend to be alkaline in nature, Echinus, along with most of the other thermal features at Norris Geyser Basin, is acidic in nature. The water in Echinus is reportedly about as acidic as lemon juice.

Echinus has been known to drastically change the frequency and power of its eruptions over the history of the park. The current activity will likely change at some point in the relatively near future.