“From where the sun now stands, I will fight no more forever.”
Cheif Joseph

Summer 1877 brought tragedy to the Nez Perce (or, in their language, Ni-Mii-puu). Many of their tribe had been removed from homelands to a reservation. Now the U.S. Army was ordered to put the remaining Nez Perce there. These bands objected because they had not sold their land to the U.S. government nor signed a treaty. Nez Perce leaders decided to lead their people in search of a new home. The trek of more than 800 people and 2,000 horses was to be peaceful. But warriors killed Idaho settlers as revenge for earlier murders, which caused the Army to chase the Nez Perce. Their trek became a flight marked by skirmishes and battles, the last of which stopped them more than 1,000 miles away from their homeland and less than 40 miles from safety in Canada.

The Nez Perce traveled northeast from their homeland in the Wallowa Mountains of Oregon, across a raging Snake River, then into north-central Idaho. After the battle at Clearwater, they followed well-worn trails across the rugged Bitterroot Mountains, entering Montana near Lolo Pass. They moved without conflict south to the Big Hole, where the Army caught them by surprise and killed Nez Perce of all ages. After that, the Nez Perce moved as quickly as they could through more mountains, across Yellowstone, then north toward Canada. 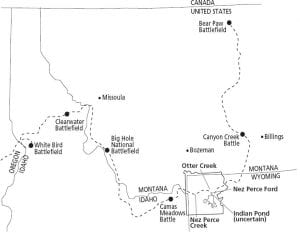 The Nez Perce entered Yellowstone on August 23rd. They knew the park well, having visited often to hunt and gather food or while traveling east to the buffalo hunting grounds of the Great Plains. During the two weeks they crossed the park, the Nez Perce encountered all 25 people known to be visiting the new park at that time. To obtain supplies, they attacked or took hostage several tourist parties—with no intention of harming the visitors. But as revenge for the deaths at Big Hole (an earlier battle on their trek) warriors killed two visitors, and left a third for dead. The group continued traveling through the park and over the Absaroka Mountains. They eluded Army troops in a deep, narrow canyon of the Clark’s Fork of the Yellowstone River. At Canyon Creek, near Billings, they engaged in another battle with the Army, then continued their flight toward Canada. The last battle occurred in the foothills of the Bear’s Paw Mountains, less than 40 miles from the Canadian border, in October. After fierce fighting, the U.S. Army laid seige to the Nez Perce camp. Some Nez Perce escaped into Canada, but the rest surrendered on October 5. This is where it is believed that Chief Joseph said, “From where the sun now stands, I will fight no more forever.” The 1,170-mile flight had ended.

The flight of the Nez Perce is commemorated at 38 sites in Washington, Oregon, Idaho, and Montana as part of the Nez Perce National Historical Park. The sites include Big Hole National Battlefield and Bear Paw Battlefield, a National Historic Landmark. In addition, Congress recognized the trail’s national significance by designating it as the Nez Perce (Nee-Me-Poo) National Historic Trail. The trail includes the portion traversing Yellowstone National Park, which crosses or approaches the main park road in four places: Nez Perce Creek, Otter Creek, Nez Perce Ford, and Indian Pond (see map on the other side). The Nez Perce entered the park along the Madison River, traveled up Nez Perce Creek past Mary Mountain, crossed the Yellowstone River at Nez Perce Ford, traveled up Pelican Valley, then likely moved through the Hoodoo Basin and across the Absaroka Mountains in the northeast part of Yellowstone. If you travel other parts of this trail outside the park, look for booklets and exhibits explaining events of the Nez Perce flight along each segment. Wherever you encounter the trail, you will be following the Nez Perce route and portions of many trails walked by generations of Native Americans over thousands of years. The Nez Perce route was used in its entirety only once, but they consider the trail to be part of their sacred land.

Traditionally, Nez Perce lived in separate bands and were led by various warriors. This fluid social and political system allowed them to move in small groups during times of low resources (such as winter) and as large groups during times of abundance (such as summer). But this system—used by many tribes— also confused U.S. treaty negotiators who assumed the signature and agreement of one band bound the entire tribe. This confusion is part of what caused the troubles of 1877: several bands never sold their land to the federal government and never agreed to move to a reservation. The most famous leader of these bands, Joseph, was one of several who led their people on the journey of 1877. Other leaders included Looking Glass, Poker Joe, and White Bird. Today, Nez Perce descendants of this trek live among three groups: the Chief Joseph Band of the Confederated Tribes of the Colville Reservation in Washington, the Confederated Tribes of the Umatilla Indian Reservation in Oregon, and the Nez Perce Chief Joseph Tribe in Idaho.