The records presently available indicate it was during this period that white men first became aware of the thermal features of the Yellowstone region. With our purchase of Louisiana from France on April 11, 1803, the way was open for official, semiofficial, and private exploration of the western reaches of that vast territory, and such ventures were immediately organized. Chief among these was the party led across the almost unknown West, from St. Louis to the mouth of the Columbia River and back, by Captains Lewis and Clark in 1804-06; and yet, despite the great interest of those explorers in the geography, geology, anthropology, and natural history of the country they traversed, the first notice of something unusual on the headwaters of the Yellowstone River did not come from them.

Instead, it appeared in a letter addressed to the Secretary of War on September 8, 1805, by Gov. James Wilkinson of Louisiana Territory, who included the following:

I have equipt a Perogue out of my Small private means, not with any view to Self interest, to ascend the missouri and enter the River Piere jaune, or yellow Stone, called by the natives, Unicorn River, the same by which Capt. Lewis I since find expects to return and which my informants tell me is filled with wonders, this Party will not get back before the Summer of 1807—they are natives of this Town, and are just able to give us course and distance, with the names and population of the Indian nations and bring back with them Specimens of the natural products . . . . [1]

Nothing further is known of the expedition Governor Wilkinson claims to have sent out; however, he soon obtained additional information from Indian sources in the form of a map drawn on a buffalo pelt. This delineation of the Missouri River and its southwestern headwaters was forwarded to President Thomas Jefferson on October 22, 1805, with a letter stating:

The Bearer hereof Capt. Amos Stoddard, who conducts the Indian deputation on their visit to you, has charge of a few natural productions of this Territory, to amuse a liesure Moment, and also a Savage delineation on a Buffaloe Pelt, of the Missouri & its South Western Branches, including the Rivers plate and lycorne or Pierre jaune; This Rude Sketch without Scale or Compass “et remplie de Fantaisies ridicules” is not destitute of Interests, as it exposes the location of several important Objects, & may point the way to useful enquiry—among other things a little incredible, a Volcano is distinctly described on Yellow Stone River . . . . [2]

At some time following its arrival at Washington on December 26, the buffalo-pelt map was placed in the entrance hall of President Jefferson’s Virginia home, Monticello. [3] George Ticknor, who visited Monticello in February 1815, mentions this map in his description of the Hall, noting: “On the fourth side, in odd union with a fine painting of the Repentance of Saint Peter, is an Indian map on leather, of the southern waters of the Missouri, and an Indian representation of a bloody battle, handed down in their tradition.” [4] It is the opinion of the leading Jeffersonian scholar that the map was transferred to the University of Virginia where it was probably burned when the Rotunda was destroyed by fire. [5]

The Lewis and Clark Expedition passed close to the Yellowstone region with no evident awareness of the thermal features hidden there. Indeed, the description of the Yellowstone River which was subsequently published is geographically vague; [6] however, some information concerning the thermal features of the region was obtained later. In Codex N, of the original journals of the expedition, there are entries which Thwaites believes were added on blank pages by William Clark after his return to St. Louis (probably after 1809). Under the heading, “Notes of Information I believe Correct,” he makes this statement about the country south of the “Rochejone”:

At the head of this river the nativs give an account that there is frequently herd a loud noise, like Thunder, which makes the earth Tremble, they State that they seldom go there because their children Cannot sleep—and Conceive it possessed of spirits, who were averse that men Should be near them. [7] 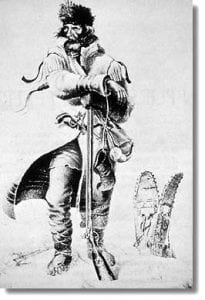 Additional information which came to Clark after the return of the expedition was entered upon a manuscript map he continued to amend for a half-dozen years as reports were received from fur traders who had pushed into the wilderness. [8] One of these was John Colter, a former member of the Lewis and Clark Expedition who remained in the mountains, and, later, while an employee of Manuel Lisa, made an epic winter journey which took him through the Yellowstone region. Something of what Colter saw was passed on to William Clark, who was thus enabled to chart several features of that terra incognita.

Lake Biddle (Jackson), Eustis Lake (Yellowstone), and the “Hot Spring Brimstone” shown near the crossing of “Colters rout” over the Yellowstone River are landmarks which confirm John Colter’s passage, in 1807-08, through what is now Yellowstone National Park, and his discovery of at least one of its thermal areas. The identification of the latter can be made with reasonable assurance because of the proximity of Clark’s notation to the crossing. The ford opposite Tower Fall, where the Bannock Indian trail (an aboriginal thoroughfare connecting the plains of central Idaho with the Yellowstone Valley and the Wyoming Basin) crossed the river, is the only place for many miles in either direction where a man traveling afoot could cross that stream—and then only during the low water of late fall and winter. This crossing is made at the “Sulphur Beds,” which, together with the Calcite Springs a short distance downstream, make the locality sufficiently noisome to warrant the use of the term brimstone in its description.

Clark’s manuscript map (map 1.) of the Yellowstone features deserves some notice. The relative sizes of the two lakes are reasonably correct, as portrayed, and the outline of Eustis will pass for that of Lake Yellowstone with its prominent indentations rounded-off; also, the distances—from Biddle to the southern shore of Eustis, and from the outlet of the latter to Colter’s crossing of Yellowstone River—are acceptable. [9] However, the reasonableness of Clark’s cartography was lost in the engraving Samuel Lewis made from the manuscript map. His map, [10] which was the one published in 1814 with the History cited in note 6, showed Lakes Biddle and Eustis as nearly equal in size, changing the outlet of the latter to its southern extremity and giving it the elongated shape which was characteristic of most map presentations for a half-century thereafter (map 2).

This is the place to mention what appears to be an unwarranted attempt to substantiate the presence of John Colter in the Yellowstone region. In regard to this supposed discovery, Phillip A. Rollins is quoted as follows:

In September of 1889, Tazewell Woody (Theodore Roosevelt’s hunting guide), John H. Dewing (also a hunting guide), and I, found on the left side of Coulter Creek, some fifty feet from the water and about three quarters of a mile above the creek’s mouth, a large pine tree on which was a deeply indented blaze, which after being cleared of sap and loose bark was found to consist of a cross thus ‘X’ (some five inches in height), and, under it, the initials ‘JC’ (each some four inches in height).

The blaze appeared to these training hunting guides, so they stated to me, to be approximately eighty years old.

They refused to fell the tree and so obtain the exact age of the blaze because they said they guessed the blaze had been made by Colter himself.

The find was reported to the Government authorities, and the tree was cut down by them in 1889 or 1890, in order that the blazed section might be installed in a museum, but as I was told in the autumn of 1890 by the then superintendent of the Yellowstone Park, the blazed section had been lost in transit. [11]

It seems more likely that the blaze Rollins found was related to the naming of the nearby stream. Coulter Creek, which flows into Snake River near the south boundary of the park, was named for John Merle Coulter, a botanist with the Hayden Survey, because of an amusing incident which occurred there. One of Dr. Coulter’s students at the University of Chicago, where he taught botany in later years, kindly furnished the park with the eminent botanist’s own version of the event, as recorded in a classroom notebook in 1922. The student says:

Dr. Coulter was fishing one day on the bank of a stream when he felt a slap on the shoulder and turned expecting to see one of his companions, but there was a large, black bear. Coulter plunged in and swam across the stream, then looking around saw that the bear had not followed, but was back there grinning at him. The party called this stream Coulter Creek, a name it still bears.