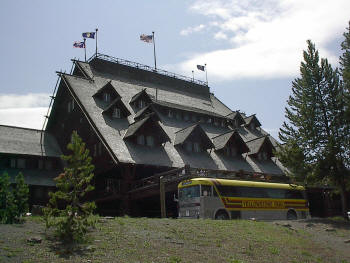 A national historic landmark located next to Old Faithful Geyser, Old Faithful Inn is the most famous and most requested lodging facility in the park.  As such, the Inn is often booked full six months or more in advance.  Guest accommodations include rooms with and without baths. Additionally, a full service restaurant, deli, gift store and interpretive tours are available at the Inn.

All park accommodations are non-smoking and, reflecting the natural surroundings of Yellowstone, televisions, radios, air conditioning, and Internet hook-ups are not available. Wheelchair accessible accommodations available on a limited basis.

Old Faithful Inn is a massive building within a short viewing distance of Old Faithful Geyser, the most famous geyser in the United States. The building is an exposed log and wood-frame structure of rustic design and gigantic proportions: nearly 700 feet in length and a central core seven stories high. The building was constructed in three major phases: the 1903 original section (known as the Old House) with the imposing gable roof, dining room and kitchen wings to the south, and small guest-room wings to the east and west; the 1913-14 east wing; and the 1927 west wing. The building faces north, oriented toward the old “circuit road” rather that toward the geyser. The building was designed by architect Robert Reamer. 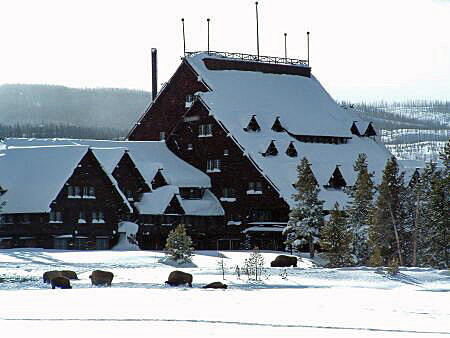 Old Faithful Inn is one of the few remaining log hotels in the United States. The Inn is a masterpiece of rustic architecture in its stylized design and fine craftsmanship. Its influence on American architecture, particularly park architecture, was immeasurable in its uses of natural materials to create a feeling of high-style rusticity. In a broad sense the design of the Inn parallels architectural ideas being used in hotel construction today with its enormous multi-story lobby surrounded by levels of galleries.

Old Faithful Inn undoubtedly is the queen of rustic hotels in the national parks. Its use of natural materials, allusions to pioneer building techniques, and strong ties with its site through the use of onsite materials are three key principles of rustic design with which National Park Service architects worked through World War II. The log walls, gnarled log brackets and balustrades, and natural finishes on the warm wood on the interior no doubt relate back to the work of William West Durant in his Adirondack buildings of the 1870s. The sheer scale of the building and the extreme exaggeration of many of its architectural features leave the building with a western frontier sense of size, space, and grandeur. Certain anglo-colonial features such as the second-story overhang and the diamond-mullioned windows cannot be overlooked, but they are subdued by the overall rustic character of the building.