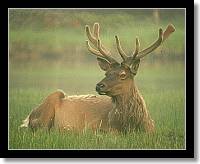 The elk is the most abundant of the large mammals of Yellowstone National Park. Oftentimes reaching the size of a large horse, elk can be seen throughout Yellowstone year-around. The cows and calves oftentimes travel in large groups of a hundred or more during the summer months,
while the males tend to travel by themselves or in very small groups, feeding on grasses and tree twigs. During the summer months, Elk can usually be seen in the Lamar Valley and in the northwest sector of the Park.

The Mammoth and Gardiner area, located at a relatively low elevation, provides forage for elk throughout the year and gives the visitor of any season ample viewing opportunities. Nonetheless, elk are liable to be spotted anywhere in the Park, and some of the mature males are majestic in stature with tremendous antler spreads. The mating season takes place in the fall, and the bulls lock antlers in fierce competition, their bugles ringing through the air, as they battle for a harem of cows. During the winter months, the weak and the young sometimes succumb to the harsh weather. Both grizzlies and wolves prey on elk, seeking the young and the weak who may lag behind the rest of the herd. Watching a grizzly stalk a herd of elk is a special privilege that only a fortunate few witness. 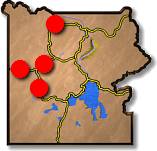 Some of the best places are along the Madison, Firehole and Gibbon Rivers. Also in the Upper Geyser basin. Also in Hayden and Lamar Valleys. The are often seen in and around the Mammoth Hot Spring area. During the fall elk rutt look for them in Madison and Gibbon
meadows and just North and East of Mammoth Hot Springs.