Mule deer, also known as black-tail deer, are ideally suited to the rugged slopes of the Rocky Mountains. A large number inhabit the park in summer, but most migrate to lower elevations, or “winter range” outside the park in the winter. Like the elk and bison, mule deer were reduced to dangerously low numbers in the mid-nineteenth century due to over-hunting. At the turn of the century, Yellowstone served as a sanctuary and continues to protect them from hunters within the park’s boundaries.

Three features make the mule deer easily recognizable: its oversized ears, its black-tipped tail, and its unique way of jumping and landing on all four feet at once. Mule deer are browsers with a highly varied diet. Studies have documented mule deer in the Rockies that eat over 600 different species of plants. They feed on grasses during spring and summer, and on branches of trees and shrubs in winter. Palatable grasses and shrubs now flourish in many of the areas burned by the 1988 fires. 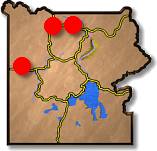 Not seen a lot in Yellowstone, but can be found in many locations. Most often seen along the Madison River and in the Mammoth Hot Springs area. They are often seen in the Blacktail area between Mammoth and Tower Jct.