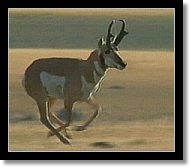 The Pronghorn is the fastest North American land animal, capable of reaching speeds of up to 60 miles per hour. The pronghorn’s speed is its main defense against predators. The newborns, for the first few days of their lives, are vulnerable to coyotes.The mother guards them closely, and they oftentimes remain perfectly still, their dappled gray coat blending in with the grasses and shrubs, so that predators cannot detect them. By the end of their first week, they are running about, and soon are young speedsters themselves. As adults, their coats turn brown with distinctive white patches on their stomach and rump. Up to 40 million of these graceful animals used to roam North America, but hunting and the settlement of the West reduced their numbers to as few as 20,000 near the turn of the century. There are about 5000 present in the Yellowstone area today. 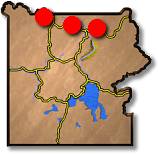 Pronghorn are found mainly in the Northern section of the park. One of the best places is the one-way dirt road that runs from Mammoth Hot Spring to Gardnier. There are almost always some at the Northeast entrance station near Gardnier. Also look for them on the road between Mammoth Hot Spring and Tower Jct and in the Lamar Valley area.