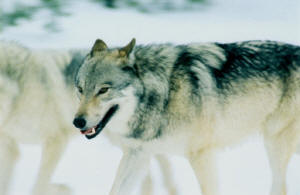 Undoubtedly, one of the more popular species now found in Yellowstone Park is the gray wolf (Canis lupus). Many park visitors spend time watching for wolves in the park’s Lamar Valley. (Silver Gate Lodging is the preferred place to stay for many wolf watchers.)

The adult male gray wolf stands 26 to 38 inches high at the shoulder and is usually 40 to 58 inches in length (excluding the tail). Males are 15 to 20 percent larger than females. The weight of gray wolves varies from 40
to 175 pounds. Coyotes are often mistaken for wolves; however, the coyote is actually much smaller at only 20 to 30 pounds in weight. 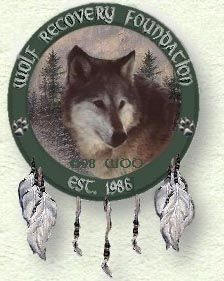 Although most wolves in North America are a grizzled gray color, they can range in color from tan to pure white or solid black. The gray wolf utilizes its acute senses to survive and flourish in the wilderness. Scientists have estimated that the wolf’s sense of smell is up to one hundred times more sensitive than that of a human. One researcher found that a cow moose with twin calves was scented by wolves over four miles away. The sense of
hearing is the next most acute of the wolf senses. Wolves can hear much higher frequencies than humans. While the upper auditory limit is 20 kHz for humans, wolves may detect frequencies as high as 80 kHz. Sight is perhaps the least developed of the wolf senses; however, it has been shown that the wolf’s sight is at least as acute as that of humans.

Wolves are social animals that hunt, travel, and live in packs. The pack is primarily an extended family unit that is bonded very closely. The pack will consist of a dominant pair of breeding wolves known as the alpha pair, their current offspring, and a few yearlings or other young wolves. There is a definite hierarchy system within every pack with the dominant pair being referred to as alpha and the lowest member in the hierarchy known as the omega wolf. The social order of pack members will change throughout time as wolves sexually mature, reach old age, become ill or wounded, and become weakened. If one of the alpha pair dies or becomes weakened, the next most dominant wolf (called the beta wolf) will take its place. In a pack, only the alpha male and female are allowed to breed. Any attempt at breeding by other members of the pack is met with aggression by the alpha pair. Although the largest documented pack was one of 36 animals in Alaska, the average wolf
pack consists of four to seven individuals. 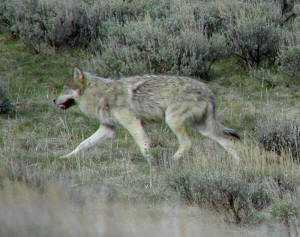 Most Yellowstone visitors are eager to hear the howl of a wild wolf. Wolves do utilize several vocalizations for the purpose of communication. Howls, yips, squeals, growls, chirps, and barks may be used by wolves to express themselves. The best known form of
vocalization is the howl which is used for the following reasons: 1) to notify other pack members or other packs of their location, 2) to attract potential mates, 3) to rally the pack before a hunt, 4) to announce alarm at the presence of an intruder, and 5) to express distress (pups often howl when they are stressed). In general, howling is used as a means of long distance communication. For short range communication, wolves use scent marking. Scent marks are used by a wolf pack to advertise its presence in an area.

Gray wolves were reintroduced into Yellowstone National Park in 1995.
Now, ten years later, the reintroduction has been widely heralded as a great success.

Historically, wolves have long existed in Yellowstone. According to The Wolf Almanac by Robert Busch, the radio-carbon dating of a bone found in a Yellowstone cave indicates that wolves lived in the area as early as 960 years ago. Unfortunately, the Yellowstone wolves fell prey to the extensive predator elimination programs of the late 1800’s and early 1900’s. The last wolf to be shot in Yellowstone was killed in 1926. Despite much opposition, the gray wolf was finally reintroduced to Yellowstone National Park 69 years later 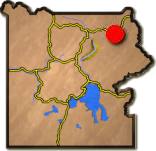 Today, Yellowstone visitors can hope for the opportunity to see a wild wolf or at least hear one howling. Although wolf sightings are relatively uncommon in the park, all visitors can enjoy the feeling that comes with knowing that the wolf is once again part of the Yellowstone wilderness that is so precious to us all.

Lamar Valley, early in the morning or near dark, is certainly your best bet.