Seeing a grizzly in Yellowstone is priceless.
Getting too close to one is foolish.

The Grizzly Bear is a powerful predator, capable of out sprinting a horse, and weighing as much as

Certain characteristics distinguish grizzlies from black bears. The grizzly is larger, both in girth and weight. The grizzly’s coat ranges from tawny cinnamon to light brown or even black. Some grizzlies are flecked with recognizable “silver tips,” creating the “grizzled” look. A feature also associated with grizzlies is the shoulder hump, and area of well- defined muscle. Another is his dish-shaped face.

Grizzlies hibernate in dens during the winter. This is when the cubs are born. Emerging from their dens in the spring with one to three cubs, the mothers are very protective. They will not hesitate to charge intruders which they perceive as threatening their cubs. 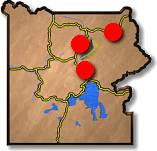 y Bears range throughout Yellowstone but are most often seen in and around the Dunraven Pass area and just past the turn off to Mount Washburn. Another good area is across the Yellowstone River in Hayden Valley and in the Fishing Bridge area. Also in Lamar Valley. A good pair of binoculars or a spotting scope is a must. An Introduction to Yellowstone’s Grizzlies In Yellowstone National Park, March is the month that begins to bring hints of spring and the upcoming summer. Although the snow is still deep in the park during March, mild sunny days can become common this time of year. March is also the time of year when the grizzlies of Yellowstone may begin to exit their dens from hibernation in search of water and food. The males and poorly conditioned bears exit earlier than sows with cubs. After exiting the den, bears seek large quantities of water, and will eat snow if no water is readily available. Although they are not immediately interested in food, the bears will feed lightly on herbs and roots to clear the kidneys and digestive tract. Eventually, the bears will seek out new vegetation and winter-kill carcasses.

The visitor’s center at Mammoth Hot Springs will have more specific information on bear activity for any given time. Spring is also the time of year when sows will introduce their newborn cubs to the outside world. It is very important to remember that bears will aggressively defend their cubs from any perceived threat. A female grizzly or black bear with cubs can be extremely dangerous. Never approach a bear, especially one with cubs! The best way to avoid a bear attack is to take precautionary steps. First, always respect any closure sign that may be posted. These signs are posted for your safety and the benefit of the bears. Second, when you do go hiking or backpacking, always remember to make noise (talking, singing, whistling, etc.) to let any bear in the area know of your presence. If a bear detects your presence, it will usually leave the area immediately. However, if you surprise a bear, the chances of an attack are much greater. Another rule to remember is when camping, hang your food from a tree (inaccessible to grizzly bears) preferably 100 yards away from the campsite. Never store food in your tent or close to where you will be sleeping.

Bears can smell food from miles away even if it is packaged or sealed in a container. The sense of smell for bears ranks among the keenest in the animal world. A bear has been known to detect a human scent more than fourteen hours after the person passes along a trail. At any rate, bears have an extremely keen sense of smell and are always seeking food. In short, when in Yellowstone, obey the trail closure signs, follow the rules of bear country use, and exercise some common sense. The grizzly bear is one of the many awesome and beautiful animals that can be found in Yellowstone National Park. If you have the opportunity to see one on your visit to the park, consider yourself fortunate since these animals are elusive and not commonly seen by visitors. When you visit Yellowstone, stop by the visitor’s center in Mammoth. The park rangers will be able to provide you with more information on current bear activity, the rules to follow in bear country, and defensive measures to take should you have a close encounter with a bear.