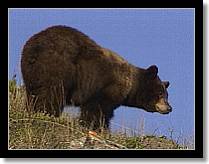 Black Bears are the most numerous member of the bear family in North America, and are found from the Pacific to the Atlantic coast. There are an estimated 500-600 black bears inhabiting Yellowstone National Park.

Black bears are not all black; their coats can be cinnamon, blonde, brown or black. Brown -colored black bears are
sometimes mistaken for grizzlies. Black bears are smaller than grizzlies: adult males weigh between 200 and 600 pounds, females between 150 and 400 pounds. The black bear’s rump is higher than it’s shoulder, and it’s head is “Roman-nosed”, rather than the grizzly’s dish shape. Black bears feed on a variety of grasses, roots, berries, and other plants, in addition to small rodents and animal carcasses. 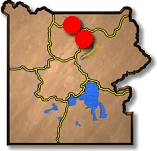 Black Bears can be seen most anywhere in Yellowstone at
anytime. They are often seen around the Tower area and in the Blacktail plateau area between Tower and Mammoth Hot Springs. Lamar Valley is another good area and along the Madison and Firehole rivers.