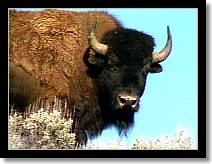 The Yellowstone bison story covers more than one hundred years of struggle and conflict surrounding one of America’s most majestic animals. In the early 1800’s, an estimated 65
million bison roamed throughout the continent of North America. However, market hunting and poaching had a devastating effect on the bison population; and by 1890, fewer than 1,000 remained! Even with the establishment of Yellowstone National Park, protection and sanctuary for the bison did not occur until the U.S. Army arrived in 1886 to protect the park’s resources.

Due to protection and manipulative management (transplanting bison to different parts of
Yellowstone), there were approximately 1,500 bison in Yellowstone National Park by 1954. Beginning 1968, the manipulative management of Yellowstone bison was discontinued and the population was allowed to fluctuate based on environmental conditions (i.e. winter weather, food availability, etc). In the 1970’s and 1980’s, there were a series of cool, wet summers followed by mild winters. These conditions allowed for an abundance of grasses for the bison to feed on and a reduction in the winter mortality rate. 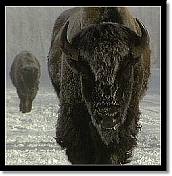 In addition, snowmobiling in the park has helped more bison survive winters since the groomed roads cut down on the amount of energy that a bison uses to travel when compared to traveling through deep snow. By the winter of 1996 to 1997, there were approximately 3,500 bison in Yellowstone National Park.

The bison (often referred to as buffalo) is truly a majestic animal. An adult bull bison may be six feet tall at the shoulder and weigh 2,000 pounds. Females look like the males except that they are smaller and have more slender horns. Bison mate from July through early August, and the calves are born in April and May. During the spring and early summer, new-born calves can often be viewed in the Firehole area and Lamar Valley.
Although viewing the young calves can be an exciting experience, it is very important that
you do not get too close to the animals for observation or photographs. Bison may appear
big and slow, but they can run up to 30 miles per hour. Yellowstone visitors are gored
every year, because they venture too near in attempts to photograph the animals.

Today, the Yellowstone bison still faces conflict and struggle. The most recent modern
issue is the disease called brucellosis which can cause abortions in domestic cattle. Some
bison as well as elk are infected with the disease. Although there are no documented cases
of wild, free-ranging bison transmitting brucellosis to cattle in the wild, the possibility of transmitting the disease exists if domestic cattle come into contact with infected birthing material or a new-born calf of an infected bison. 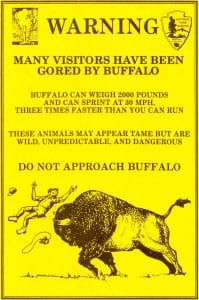 Due to a lawsuit filed by the State of Montana, a new bison management plan was developed. All bison entering Montana along Yellowstone’s north boundary would be shot or shipped to slaughter. In addition, all bison entering Montana through the park’s west boundary would be tested for brucellosis. Any bison testing positive for brucellosis would be shot or shipped to slaughter. Due to the management removals and winter-kill, the Yellowstone bison population in March of 1997 was estimated to be approximately 1,200 to 1,500 animals. That is less than half of what the population was estimated to be at the start of the 1996-1997 winter.

Yellowstone National Park now has a new bison exhibit called “Where the Buffalo Roam”. It opened on August 1, 1997 at the Canyon Visitor Center. The exhibit traces the story of the Yellowstone bison and features educational stations and two full-size dioramas with taxidermy specimens. The exhibit also presents issues that arise when the wild bison confronts the modern world. Although the Canyon Visitor Center is closed for the winter, it will be open again for the summer season. If you are planning a trip to Yellowstone National Park for next summer, try to visit the new bison exhibit. Also, if you will be in Yellowstone during the late spring or early summer, stop by Lamar Valley or the Firehole area as they do present an excellent opportunity to view new-born bison calves. 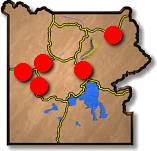 Bison are almost always on the move and are seen in different areas during different seasons. Probably the best spot is in Hayden Valley along the Yellowstone River. Some other spots are along the Madison, Firehole and Gibbon Rivers. Look for bison in the Fountain Flats area and the Mud Volcano area, also in Lamar Valley. Lone Bulls are often seen around the Lake Hotel and Fishing Bridge.